A Passion for Changing Lives 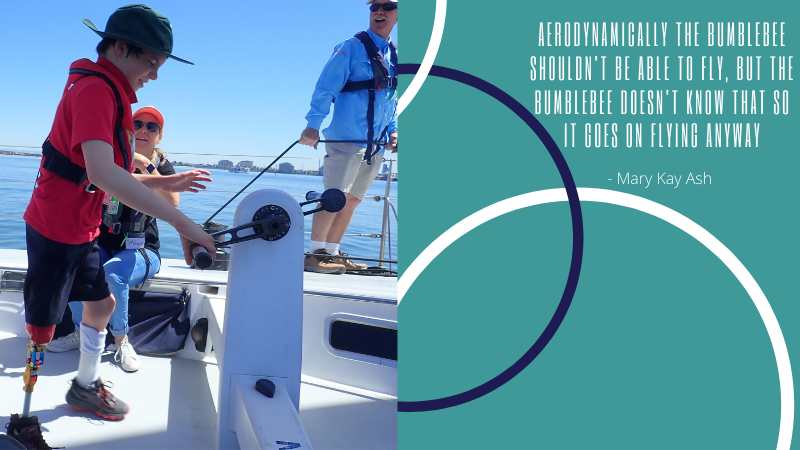 Did you know the Making Waves Foundation has a programme that runs out of Docklands in Melbourne and that this very successful initiative has been running since March 2016?

Making Waves blog writer, Fiona Mitchell, spoke to Melbourne coordinator, Denise Johnson, to learn more about the Melbourne volunteer team and the incredible work they do.

The programme is based in the heart of Melbourne in Docklands. Students and teachers meet the boat in Docklands,  sailing out, together with the MWF volunteers onboard, along the Yarra River into Port Philip bay, around Port Melbourne and then back into the Yarra river and to Docklands.

97 is the name of the boat on which they sail. The MWF crew like to share her great history with the participants in their programme. She is a well campaigned and well known race boat in Australian waters. Built in 1993 by Boatspeed, she was the line honours winner in the 1993 Sydney to Hobart race, the smallest boat ever to achieve that feat. The following year she won outright on handicap in the 1994 Sydney to Hobart  - two amazing wins in two years. After a re-fit in 2013 she spent some time in Western Australia and then was brought back to Melbourne where she raced successfully, winning line honours in 2013 in the Melbourne to Launceston yacht race.

97 was bought by a donor specifically for the use of SWD in Melbourne which enabled the Winds of Joy programme to start in Melbourne. Two days a week , morning and afternoon, students and teachers from Special Education schools all over Melbourne get to sail on 97, in terms one, two and four. It is too cold to run a winter programme in term three in Melbourne!

The programme wouldn’t run without the band of dedicated volunteers, four of whom have been with the programme since it began, including Denise Johnston who is the volunteer coordinator. Denise explains “We probably have about 20 people and we need 12 people each week, so we have a fairly regular group. The only people who have left the programme as the group has grown over the years are people who have moved interstate or gone back overseas. We are very lucky, We’ve got great teamwork happening. MWF is something that our volunteers believe in and enjoy doing so although we are only a small group, we are a very committed group who work incredibly well together”. 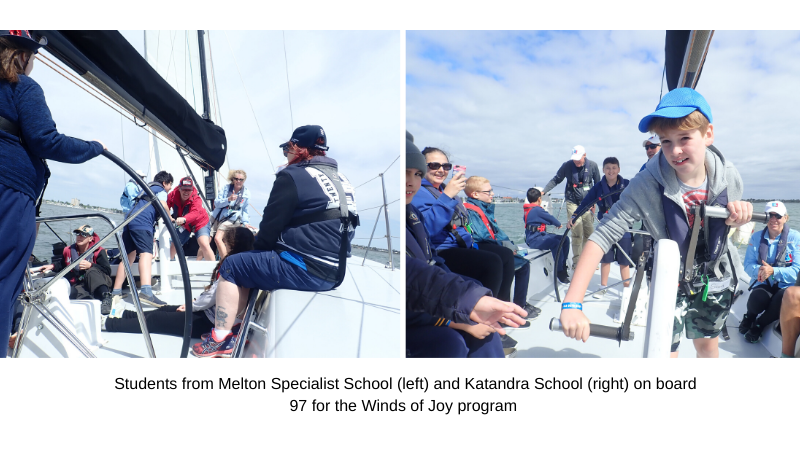 There are male and female volunteers, two thirds to one third – many of whom are still working full time, unlike many organisations where the volunteer base is mostly retired people, a unique feature of the Melbourne MWF programme. Many own their own boats and a  number run their own businesses which allows them the flexibility to take a day off each week, a day which they commit to MWF. They have a real belief in MWF, they are people with great empathy, people who want to give something back and people who love sailing and being outside. “All of this feeds to the students we take out” says Denise. “It works brilliantly”.

In addition the programme in Melbourne has the support of Australian Maritime Technologies. As well as sponsoring the programme, they release one of their employees for  one day each week to go sailing as part of the crew on 97. As Denise explains “The sponsor loves it because there is real ownership of where they are giving their money, there is real staff involvement in the programme - for those reasons, it is tick, tick, tick”. She adds “Because these people come from the maritime industry we have the most amazing things happen. On one of our last sails, there was a submarine in town. The crew member who came from the sponsor had worked on a fitout of a navy boat, he was able to share fascinating information for the students on board as well as the crew”.

The programme is offered to all special needs and child development schools in Melbourne. Denise describes how popular the programme is. “MWF has to limit our schools to bringing the same child only once a year. Our schools would love to bring them more than once a year. We did want to open up the programme to some new schools and a couple of our schools are so large that if they could they would probably book all our sails!” 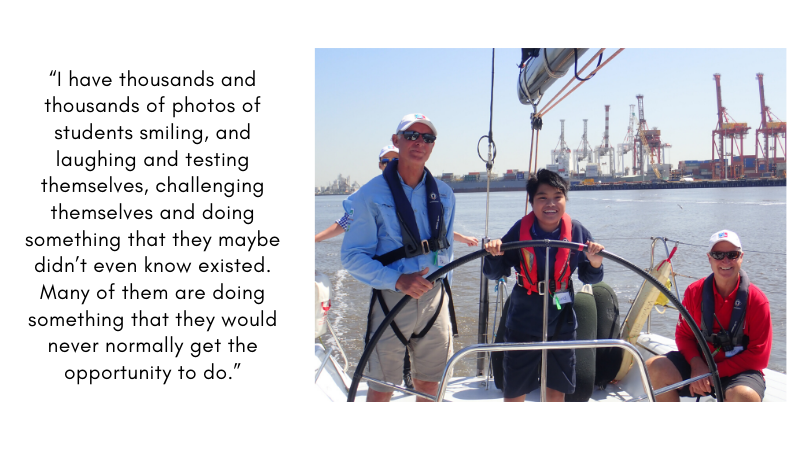 “The teachers who have gone out have seen the students have an amazing time. The teachers are really looking forward to their opportunity to come on board though there are the occasional teachers who are very pale when they get back off the boat!”

It is the experience that the students have that makes the volunteers so happy to give of their time. It is hearing from the teachers that they have never seen a particular student smile before and they haven’t stopped smiling all day. Or that they can’t believe that that student was confident enough to walk to the bow of the boat. As Denise says “If you haven’t been part of the programme or haven’t seen it in action, it is hard to describe how difficult it is for some of these students to get on the boat or even to put on a lifejacket – something that we all take for granted and assume is available to everybody.” Denise adds “I take the photos on the boat and I have thousands and thousands of photos of students smiling, and laughing and testing themselves, challenging themselves and doing something that they maybe didn’t even know existed. Many of them are doing something that they would never normally get the opportunity to do. And the crew in Melbourne, they really see that and they understand it and have this need to give back, so whilst sailing can be elite, we are able to let everybody, regardless of their abilities or disabilities or age, experience it We don’t teach them to sail, as such, though we may teach them some sailing terminology. What we do is get them to participate in the sailing of the boat and being part of a team. We allow the students to see what they can be capable of, the boat and sailing is a tool that allows us to do that. And we have fun doing it, sailing is fun”.

For now it is difficult to envisage how the programme will start again, given social distancing rules, but once it does there is no doubt that there will be plenty of schools wanting to participate and plenty of students who will enjoy sailing out from the heart of Melbourne and being part of the crew on 97 alongside the amazing small band of volunteers who do a wonderful job for MWF.