Partners On and Off the Water 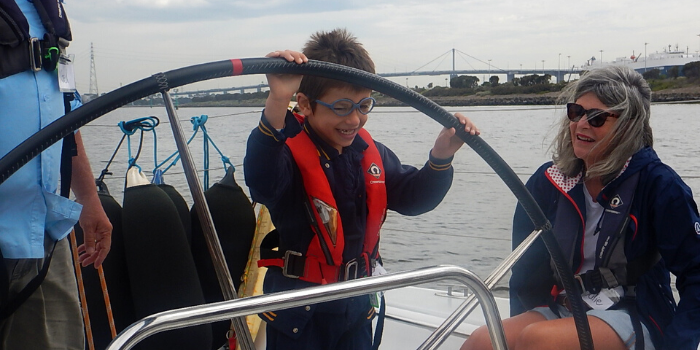 Australian Maritime Technologies (AMT) is a relatively small company with a very big heart. This engineering consultancy company of Naval ship design professionals are a major sponsor of the Making Waves Foundation (MWF) programme in Melbourne. They also support their staff in volunteering as crew on the yacht Ninety Seven during the Winds of Joy program.

Volunteer and blog writer, Fiona, caught up with Alana Sheldon from AMT to find out more about their journey with Making Waves Foundation.

Alana has been working as an electrical engineer for AMT for two years. Last year AMT became a major sponsor of Making Waves Foundation. Alana explains “AMT, as an organisation, has been in the Maritime business for over thirty years, so they understand the personal and team benefits of engaging and working on the water. When AMT and Rob Dunbar (the Managing Director) were looking to extend their community outreach and the social side of the organisation they found MWF, because they had that connection to maritime and to being on the water, it felt like it fitted and just fell into place.”

Each week, when the Winds of Joy programme runs in Melbourne, one member of staff from AMT joins the volunteer crew on Ninety Seven as they take disabled and disadvantaged students and their teachers and carers out on the water. The AMT staff members enjoy that the MWF crew share their sailing expertise, giving them tips and allowing them to develop confidence in their own sailing skills. A great rapport between them has developed over the time they have spent together on the water and they speak highly of the crew, especially Jeff who is the lead Skipper on Ninety Seven. Alana re-iterated a number of times how competent and inclusive the crew is and how comfortable the AMT volunteers are to go out with them.

Alana had volunteered previously with Riding with Disabilities and so took on the role of liaising between the staff at AMT and Denise Johnson who is the Melbourne volunteer manager with MWF. Alana explained that when AMT first joined with MWF an email went out to the staff asking who would be interested to volunteer to go sailing, with half the time supported by AMT and half the time committed by the staff members themselves. The response was so positive and a  group of 8 staff members now regularly sail with MWF, each doing about one day of sailing per month. AMT felt that that number of staff would allow them to develop a good relationship with the crew on board and to be more involved rather than having more staff involved with fewer sails each month.

Of those 8 staff members only 2 had previous sailing experience but all share a love of boats, as evidenced by the fact they are working in the maritime industry.

There are tangible benefits of this arrangement both to AMT and to MWF. For MWF, there is a guaranteed volunteer for every session, someone with experience in the maritime industry which they can share with the crew and the students who come on board. For AMT there is the knowledge that they are supporting such a worthwhile cause as well as the hope that their sponsorship will raise the profile of MWF and increase awareness of the challenges of disability and disadvantage in the hope to make a more inclusive society. Alana adds “It is broadening our own staff’s awareness of the issues and also broadening their want to do something”. It is also a reflection of the company culture of supporting each other, interacting and contributing between the different disciplines within the company.

For those who volunteer with MWF there are many benefits, giving back to the community, making connections with the students onboard, a feeling of being useful, of greater awareness of the challenges of having a disability or being disadvantaged. There is also the bonus of training days with MWF, learning about sailing and being in a completely different environment out of the office. Add to that the conversations that start in the office after a day of sailing when everyone is interested to know how the sail went, so, even though not everyone in the office goes out with MWF, it is something that everyone knows about and wants to know about! And, of course, there is the joy of sailing itself which, as Alana puts it, “doesn’t diminish either, the more you do it. It’s always like the first time, always.”

From their first sail, having been a bit tentative about what to expect of the day, the volunteers from AMT have enjoyed being out on the water, getting to know the crew and making real connections with the students, the teachers and the parents on board.  On Alana’s first sail, she experienced a moment which reinforced her reasons for volunteering. There was a very quiet student on board, he didn’t acknowledge her as she sat beside him and talked to him for about twenty minutes. At the end of the sail, the students go to the front of the boat and enjoy the sun and sit there for five to ten minutes. As this student made his way back to the back of the boat, he made eye contact with Alana and smiled and reached out for her hand. “The fact that he was willing to grab my hand, even if it was just to help him down, to me was amazing. Just from something as simple as talking with him for twenty minutes with no response back. It was such a little thing but it has a big impact on you.”

Another story told to her was about a student who was causing all sorts of mischief, he was a little uncontrollable and a few people on the boat were not sure that he was aware of what was going on as he wasn’t responding in any way, he was just fiddling with things. At the end of the sail the students have a chance to do a survey about how they enjoyed the experience. What was memorable was that this student “absolutely nailed the response, he was so switched on and said what he had really enjoyed. And it was amazing to know that he had gotten something so positive from that experience even though he didn’t interact with the crew that much”.

As Alana says “It is so rewarding to see students smiling and laughing and opening up as the sail goes on.” All the volunteers at AMT agree, they love experiencing the water with the students and say that it is great to see them learn so much and enjoy it so much. They see the optimism and the confidence that being out on a boat brings to the students, which is the idea underpinning the Winds of Joy programme.  The volunteers are missing being out on the water, missing the interactions, and the freeing experience that sailing is. For now they are meeting up with the MWF crew on zoom, keeping the connections going whilst waiting to get out on the water again. For the AMT volunteers, that time can’t come soon enough.

To learn more about AMT and their work visit their website.