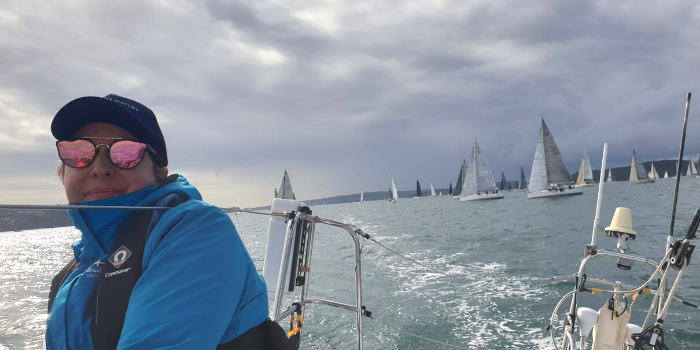 "Sailing’s a great leveller…in the middle of the night everyone’s blind and in a howling gale everyone’s deaf. And in huge seas everyone’s scuttling around on their bum".

Social inclusion is a phrase that is frequently tossed around in our day to day lives. But what does it actually mean? According to WorldBank.org, social inclusion is “the process of improving the terms on which individuals and groups take part in society—improving the ability, opportunity, and dignity of those disadvantaged on the basis of their identity.”

This is one of the key values advocated by Making Waves Foundations. Through using sailing as a social equalizer, the programs endeavour to challenge common assumptions about what people with disabilities can and can’t do.

Because sailing is a team sport that requires various roles, it allows all individuals to contribute and find their place on board, whether that be at the helm, mast or mainsail trimming. People of all different backgrounds, abilities and socio-economic circumstances are treated as equals and are able to work in a team environment without prejudice or discrimination.

Alice Anderson joined MWF in 2018 when she came across a callout for dyslexic sailors on Facebook. Having coordinated the Twilight race program that runs on Wednesday evenings during summer months and now assisting with the Sydney race team, Alice has personally experienced the positive impact of Making Waves’ socially inclusive culture. Whilst Alice has been interested in sailing since a young age, she had never made the jump from dinghies to larger yachts. “I think one of the issues for me was, being dyslexic, people can sometimes get a bit frustrated with me. They will sometimes say something once to me, and I just won’t get it,” she says. Since joining MWF, Alice feels that her sailing skills and attitude towards the sport have come a long way due to the welcoming and adaptive nature of the foundation.

“If you give people the space, then they can definitely achieve a whole lot of different things, and it just brings more richness to the crew - having people from different backgrounds included,” Alice says.

The Twilight race program puts this idea into practice through bringing together volunteers, people with disabilities and corporate sponsors. It allows adults with disabilities to come sail in a warm and accommodating environment, as well as offering a thank you to volunteers for their time and to corporate sponsors for their financial support. This program sheds light on the transformative experience of sailing, both for people who have disabilities themselves and for the wider community.

The common assumption is that a team consisting predominantly of people who have disabilities isn’t going to function as well as one made up of people who do not. Yet, MWF proves otherwise. MWF’s race team in Sydney is primarily made up of adults who have disabilities themselves. Ranging from visual impairment and dyslexia to spinal injuries, there are several types of disabilities on board, as well as varying levels of sailing experience. Despite this, all the crew members are united by an optimistic and empathetic approach which allows them to successfully work together and sail in races.

“The purpose of the racing, it’s really to show the broader community how people with disabilities, especially adults, can be included in such a mainstream sport and be able to be successful, to be able to overcome barriers,” Alice says. The race team’s success proves that social diversity really does enhance team environments. They train once a week and are always working towards the next race.

While it is necessary that the boats are equipped to adapt to a range of people, the environment created on board is equally, if not more, important. “It does really boil down to attitude, and it’s also asking the individual exactly how they want to work. And then, also trying different things and seeing what works,” Alice says. “It’s about making sure the adjustments are there, and then focusing on what people can do.”

While the race team has a more competitive edge than some of MWF’s other programs, Alice also expresses the importance of acknowledging what the crew level is, and not pushing people too far. “You don’t want to break people or break the boat,” she says. This balance between focusing on the ability, or what people can do, and acknowledging when individuals need assistance is what allows MWF to create a supportive, non-discriminatory environment.

Alice feels that MWF’s programs are models for how wider society could be. “It’s showing on a micro level that if you give people certain roles, if you look at what they can do, if you make certain adaptations, and if your attitude is correct, that you can achieve a lot of things”, she says. “If you could bring that attitude and those approaches, and that acceptance of people onto a society level, I think our society would be a whole lot better”.