A Conversation with Skipper Mike Muir 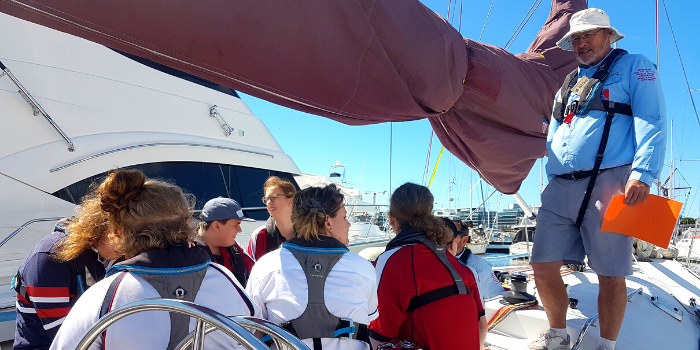 Mike Muir’s involvement with the Making Waves Foundation (MWF) began when he saw an advert in a copy of the “Afloat” magazine. Some five or six years ago the ad he had spotted was “something to do with sailing and it was about volunteering. I had a vague idea of what it was about but in actual fact I didn’t”.  With his retirement in mind, and with an idea that sailing was something he could focus on at that time, he found that it was what he had been looking for.

Mike learnt to sail with East Sail, undertaking an Introduction to Sailing course, followed by Competent Crew, all the way up to Day Skipper. At the same time, after a visit to the office, he began volunteering with MWF (then Sailors with DisABILITIES). He was crew with the skippers of the day, including the founder of SWD, David Pescud, who ran a training day each Wednesday. The combination of the knowledge acquired by watching those skippers in action and learning from David’s attention to detail, together with David’s explanations of the reasons for each action that you take on the boat was how Mike learnt his sailing skills. At the end of the training programme that SWD had put into place Mike found himself as a skipper on the SWD programme. As Mike explains “The organisation created this new formal training programme and levels, and I was one of the first people to pop out of the top and to join the other skippers”.

And it was not all about sailing. As Mike explains “A lot of things I have learnt about are nothing to do with sailing. As David says, skippers are actually managers and, as a skipper, you are a manager. You interact with the school because you are trying to provide an experience for the students, you are dealing with your own crew. You don’t just turn up and hop on a boat and go sailing, there’s a whole lot of other stuff that goes on”. He continues “I was already a manager. I had fifty people working for me before I retired. I had the ability to learn and I had the ability to lead. That’s what I came in with, but it was a whole different ball game in MWF compared to the way I had worked before. You are dealing with a lot more things that are different. In the industry I worked in people tended to be similar, whereas in the MWF programs the students come from an enormous range of backgrounds and all the crew members have different backgrounds. Underpinning this is that whilst you are giving the students an experience (of sailing on Sydney harbour) you want to keep them safe, the crew safe and the boat safe”.

Mike is understated about his contribution to MWF and the fact that he commits himself to a day a week of volunteering with MWF in Sydney, that is about 50 days each year, over which time he will take about one thousand students out sailing.  On top of that he volunteers with the Northern Campaign in which MWF takes a boat to Queensland to run the Winds of Joy and Winds of Care programmes out of Mackay and various ports up and down the coast along the way. That involves both boat deliveries and volunteering with the programmes, both as a skipper and a 2IC (Second in Command). One year he volunteered for the full length of the Northern campaign, 50 days in all (as he realised when his computer told him, when he got home, it hadn’t been backed up for 50 days!).  Mike added that he also volunteers with two other organisations.

Mike states “In terms of the MWF programmes, I’ve done everything but racing. I started out on the Winds of Joy programme and then after I got more experience, and later became a skipper, I started to do some offshore sailing”. Mike sailed to Melbourne as part of the trip that started the MWF Melbourne programme. He also sailed in the first Tasmania program. He has been part of the Winds of Change, Care programmes and the Wright of Passage programme, though whilst he has done a little bit of work on boats, he would not define himself as a shipwright. What he loves about volunteering for MWF is the variety, he doesn’t like being stuck in a rut. Mike defines the difference between working and retirement as ”when working you have the same thing going on all the time, whereas retirement is about freedom”.

MWF has given him challenges and opportunities, something which he had had in his working life but was lost in retirement. “You retire because you are the old hand and they don’t need you anymore” Mike says. MWF helped re-build his self-confidence whilst enhancing his sailing skills.

Mike’s belief is that MWF programmes are particularly effective because of the unique and transformative nature of sailing. “When you are out on the water, when you are sailing, being on the water is the singular focus. You forget about everything; you forget about your mobile phone and you focus just on that activity. You are in the moment”. Mike highlights that for most of the students who come on board the fact that they have never sailed before is a challenge, that they have to step onto the boat can be confronting for them. As soon as the boat sets sail, they are encouraged to help with taking off the fenders, stand near the edge of the boat, and they see the water rushing by. Some of them worry about falling in the water and about the sharks in the harbour. They are immediately challenged by having to get stuck in with no time to think about what they are doing, and they just do it. Because of what they have done during their time on the boat they are different when they walk off. “You can see it in the way they jump off the boat, they look around and think “Wow!””.

A student from Warwick Farm Public School having a 'WOW' moment during a Winds of Joy sail in Sydney.

It was hard for Mike to pick only one memorable example of the impact of the programme, given the number of students he has encountered, but one that came to mind was a little girl who had her hands over her ears when she came onto the boat with her mum. Mike said that he probably wouldn’t have noticed her hands over her ears until pointed out by her Mum. This was on the Northern campaign in Mackay where as soon as the boat goes out of the harbour the boat is immediately in the swell, so it goes up and down. All the students had gone to the front of the boat, together with some of the crew, and they were hanging on to the spinnaker pole, going up and down with the boat and having a great time, squealing with delight. This little girl was having a great time too, going up and down along with the other children. Her Mum said that it was the only time that that she hadn’t put her hands over her ears. She was so noise sensitive that she had spent most of her life with her hands over her ears, and yet here on the boat she was jumping up and down with all the other children. Her mother was amazed.

Mike explained that you often don’t have an idea of how transformative the experience is because you don’t always have the opportunity to speak with a parent or teacher to know what the issue is for a particular child. In this case, Mike realised how much it meant to this little girl’s mother to see her daughter enjoying herself in the same way as the other children onboard.

At the moment, whilst the on-water programme of MWF is not running, Mike is co-ordinating the cleaning of the MWF boats. It is an opportunity to catch up with some of the crew, many of whom have become friends through volunteering with MWF. Mike has also developed friendships through MWF as he has got to know a lot of different people through the programme. The social side of volunteering is important to him and to many of the MWF volunteers.  There is much to miss during this time, but Mike is looking forward to being back on the water, catching up with his crew but most of all saying to a student “Here’s a rope – go for it!” knowing the positive impact that will have.