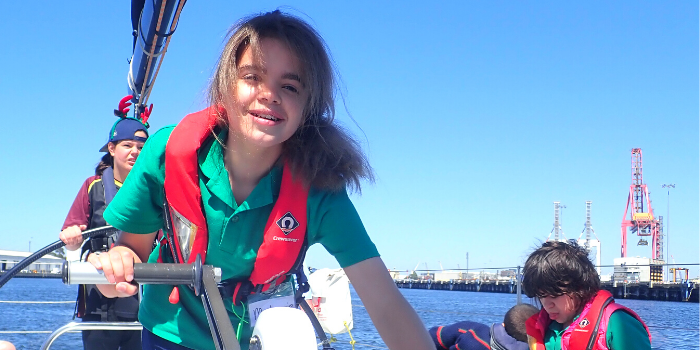 A student from Bayside Special Development School on a Winds of Joy sail out of Melbourne in 2018.

Gloria Todd was one of the first people that David Pescud, Founder of Making Waves Foundation, and his partner, Deb, met when they took a group of disabled students out sailing in Melbourne in 2015. Gloria was a teacher at the Bayside Special Developmental School, where she still teaches.

In 2014 she saw an email inviting teachers of students with disabilities to take their students out for a sail. Sailors with disABILITIES (as MWF was known then) was well established in Sydney. David was keen to give students in Melbourne the same opportunity to sail. When Gloria saw the email she thought “Well, let’s try that!”. She organised a group of students to go sailing. Hers was one of the first groups to sail out of Sandringham Yacht Club on Kayle, David’s yacht and they loved it. Even on that first sail Gloria noticed how the students reacted to sailing and being out on the water.

Gloria tells the story of one student. “One boy, L., he had ASD, no language, very routined and I don’t know how much English he understood as it wasn’t his first language. He was a very anxious student, and every day at some point during the day he would cry, and sometimes we could figure out what had upset him and sometimes we couldn’t but he always had a cry. He was in that first group we took sailing. We got him on the boat and we didn’t think he’d get on but he did. When he got on, he sat there, glued to the spot, but he did it, this was in my mind a pretty big deal. Later, in the afternoon, after we’d gone back to school and the students had had lunch and then left on the buses that take them home, I was talking with the other staff and we realised that we hadn’t seen L. cry, that day, he didn’t cry at all. That was the only day in the entire time, and he was with us for four years, that he didn’t have a cry at some point”. 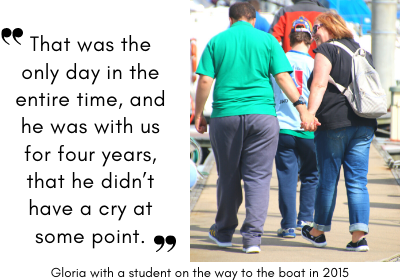 Then she tells another: “And another student on the same sail was a boy who was 13 or 14 at the time, from a very difficult parental background. He had a lot of difficulty with his father in particular. He had an intellectual disability, could be quite difficult to manage when upset as he was a big lad, he never, ever talked about his family, in particular his father. He was always play-imagining so I could imagine that he thought he was in Pirates of the Caribbean as he stood at the wheel. I had to keep getting him off the wheel so that the other students could have a turn. He put his hand in his pocket and picked out an imaginary phone, using his pinkie and his thumb, he was pretending he was on the phone. I said “Hey H who are you on the phone to?” He shouted back to me “I’m calling my Dad”. “Hey, why are you calling your Dad?” “Because I want to tell him I’m on the boat and I’m driving the boat” This was a boy who never mentioned his dad but he was so overjoyed by the experience that he wanted to call his dad and tell him. That was really, really something.”

And another “We took lots of photos and blew them to A4 and laminated them. There was one student in particular who had this big smile on his face. He had Down’s Syndrome, he was non-verbal with an intellectual disability. He was very funny and always hamming it up, and making funny faces. We took a this really great photo of him where he had this massive smile on his face and you could see the blue in the background and his yellow jacket, it was just a joyous picture. He kept pointing to the photo and he would do this gesture for more, again and again. So he really loved it. When I next spoke to his mother, she said “I have to talk to you about the photo you sent home with A. from the boat. That is the most genuine photo I have ever seen on A.  The smile is real - not one of his funny face pulling ones.”. It  made his mum cry.

Gloria told all these stories at a fundraising function to which David and Deb had invited her, a function held to establish MWF in Melbourne. She added “I also told the audience that this experience was the best motivator ever for these students and that if we could do this more often, if the students knew they would have a sail, they could have that to look forward to”. Many of the audience were moved to tears by Gloria’s passion and her obvious dedication as a teacher of students with special needs. They sponsored the organisation and pledged to become a part of it. MWF Is now an established programme in Melbourne and takes hundreds of disabled and disadvantaged students on the Winds of Joy programme each year. David Pescud wrote her a heartfelt thank you in what Gloria says is the best email she has ever received.

The Bayside School where Gloria has worked for 11 years is quite a small school with about 70 students, boys and girls of all ages and stages. As Gloria says “Disability doesn’t discriminate, so we have some students from wealthy backgrounds and some from very poor backgrounds. We have students with all sorts of disabilities, we have students with Down’s syndrome who may also have an intellectual disability or autism, we have students who are deaf, and students who are physically disabled, in wheelchairs with cerebral palsy. The school, the teachers and support workers at the Bayside school support the students to enable them to become as independent as possible, to be socially competent and to have the best possible quality of life. The Making Waves Foundation’s aim of developing confidence and self esteem by showing students what they can do, rather than what they can’t do, is a good fit with the Bayside school.

Every year since that first sail, Gloria has organised a group to go out sailing with MWF, usually they get out twice a year. Gloria herself doesn’t always go on the sails as she is keen to let other members of staff to see the benefits of the MWF Programme for themselves.

“You don’t understand until you’ve been on the boat with the students how good the experience is. You will see the students in a different light”. Gloria describes what she has seen “Every time you go out on the boat, the thing that makes it, is the people who volunteer with MWF, the crew, and the reason they make the difference, the reason they create this climate that enables the students to rise is this (and I have used this phrase repeatedly over the years when talking about the foundation) is that when any of these students step onto the boat, there is no expectation of failure. That’s what makes the difference. It is tangible and these students feel it from the crew. There is no expectation of failure and what that results in is that these students rise to the occasion. They are used to people saying to them, hang on a minute, do you need help? etc.  Although we encourage our students to be independent, we work on this every day, the sailing experience is a whole new ball game. When we take them out on the boat, it is so much bigger than them, so much bigger than their usual world, they are in a whole new environment, they are out in the open and they are on a big yacht and they just rise to it. That is what makes it so successful and I’ve seen it time and time again. I see how students do things that they would probably never do”. 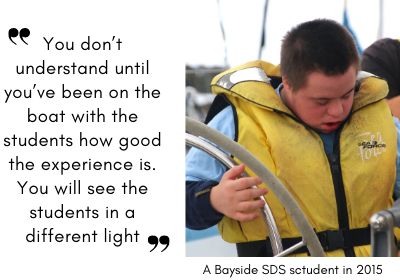 She continues “It is lovely to see students when it is their first time out on the boat (the ones who’ve been before are steering, or winding things up, helping or just sitting up at the bow enjoying the feel of the wind in their hair and the sun on their face). The best thing is taking the camera and getting pictures of the new ones. And there is nothing more gratifying for me than talking with the parents afterwards, or in this case, grandparents. We took one little boy, G. out in his wheelchair. Later his grandfather approached me to tell me to thank me for taking G out on the sailing trip and to say that although G can’t talk, they look at the photos and know what a good time he had”.

For some parents the photos taken on the sailing trips hold memories which are very precious. Gloria remembers “one little boy, P. who has cerebral palsy, he was a very active boy with the biggest smile in the world. I was in front of him, watching him steer, with the sky behind him and took a picture. It is a beautiful photo which his mum loves all the more now because since this sail, his health has deteriorated as has his physical capabilities. He had cerebral palsy but you couldn’t stop him, he’d be running around the yard, trying to climb on things that he couldn’t. Now he can only come to school for a couple of hours a day and he is tube fed. That photo is even more precious to his parents now as it captures a moment in time, a joyous reminder of their son’s spirit and strength of character.

So, there are many, many stories and memories of our times sailing with MWF. And I’m sure there will be many more when we get back up and running.”