Sailing Inspiration for When You Can't Sail 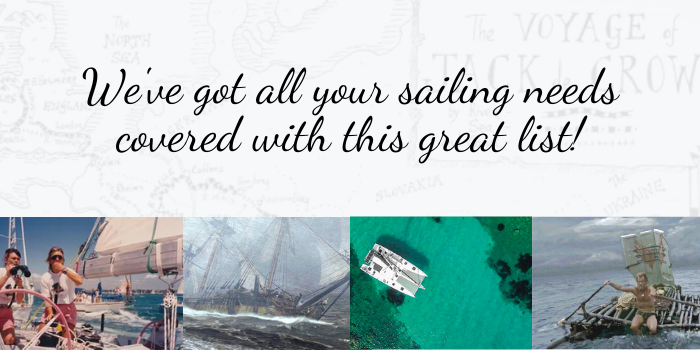 Blog writer and On Water Volunteer, Fiona, interviewed MWF sailors to find out what their go to films or books are for when they want to be out on the water but can't go sailing.

For those of us who volunteer as sailors with MWF and, especially for those of us who are still in lockdown, or those of us who don’t own our own yacht or who don’t have friends who could invite us to sail on their yacht, we are missing sailing. Sailing is defined as “motion across a body of water in a craft powered by the wind”. To me, that seems such an inadequate definition. It speaks nothing of the feeling of being out on the water, the teamwork needed to keep that craft moving, the trim of the sails optimised to catch the wind, the friendships that comes from working together as team, nothing about the feel of the wind on our faces, the sun sparkling on the sea and the satisfaction of a tack well executed. There is nothing about being out in nature and the sheer joy of sailing.

I appreciate that this is a first world problem, that we are very fortunate compared to many people and places in the world. Our heart goes out to those who have suffered the loss of a family member and to those who are struggling in terms of their health and well being and to those who have had financial hardship thrust upon them by the COVID-19 pandemic.

For us involved with MWF, we are not only missing sailing itself, we are also missing our fellow volunteers, as well as the students, the teachers and the carers who go out on MWF programmes with us. We are missing the companionship and the sense of purpose that being a part of this special community brings to us. To ease that ache of missing sailing, and our time with MWF, I asked some of the MWF team what they watch or read to give them a sense of sailing at this time when the MWF programmes are not running. Their answers were a fascinating mix of film, literature and YouTube.

Martha nominated “Cast Away”, a film from 2000 in which Tom Hanks is stranded on an uncharted and uninhabited island after his plane, making FedEx deliveries, crashes in a violent storm.

Tom Hanks said “I made Cast Away because I wanted to examine the concept of four years of hopelessness, in which you have none of the requirements for living — food, water, shelter, fire and company”. 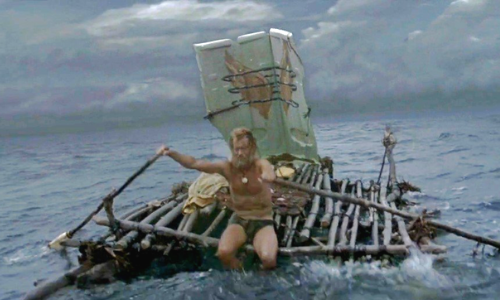 Scene from Cast Away - sailing to freedom

Hanks won Best Actor in the 58th Golden Globe Awards and Wilson, the volleyball Tom Hanks talks to for the duration of his time on the island, won the 6th Critics Choice Award for The Best Inanimate Object (who knew there was such a category!).

The reason Cast Away is Martha’s go-to film is because it is a story of hope and survival. The boat is a literal manifestation of hope, made from whatever Hank's character can find on the island, it is his escape pod from isolation and despair. When he first launches the makeshift sail, fashioned out of a portaloo wall, and the boat lifts and pushes through beyond the break, that moment is the culmination of his belief that there is something to keep fighting for. A very appropriate symbol of the hope that sailing offers to so many who attend MWF programs.

Christine nominated “The Unlikely Voyage of Jack de Crow”  written by A J McKinnon which she says is a fun, hair-raising read. Reading the reviews makes it a must-read book for any sailor:

“Truly hilarious books are rare. Even rarer are those based on real events. Join A.J. Mackinnon, your charming and eccentric guide, on an amazing voyage in a boat called Jack de Crow.

Equipped with his cheerful optimism and a pith helmet, this Australian Odysseus in a dinghy travels from the borders of North Wales to the Black Sea – 4,900 kilometres over salt and fresh water, under sail, at the oars, or at the end of a tow-rope – through twelve countries, 282 locks and numerous trials and adventures, including an encounter with Balkan pirates. Along the way he experiences the kindness of strangers, gets very lost, and perfects the art of slow travel”. 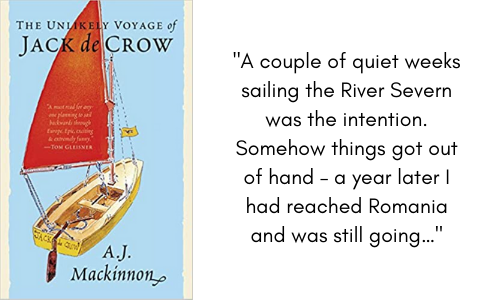 Roger Ebert, film critic, wrote that Peter Weir's "Master and Commander: The Far Side of the World" is an exuberant sea adventure told with uncommon intelligence. Based on the beloved novels of Patrick O'Brian, it re-creates the world of the British navy circa 1805 with such detail and intensity that the sea battles become stages for personality and character. They're not simply swashbuckling -- although they're that, too, with brutal and intimate violence.

He added “There are scenes at sea, including the rounding of Cape Horn, which are as good or better as any sea journey ever filmed”. 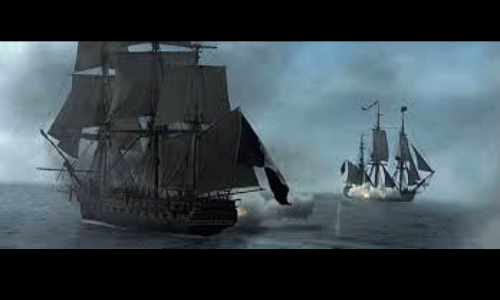 A scene from Master and Commander: The Far Side of the World

Having visited the Portsmouth Historic Dockyard last year, and spent hours, fascinated by the naval history of HMS Victory, I found myself surprisingly teary when I saw the spot where Nelson died, I can’t believe that I haven’t seen Master and Commander which is set not long after the time of Nelson. I can’t wait see this film and only wish that I had seen it on the big screen, in all its glory.

Mike added that he mostly watches people who are sailing or racing around the world on YouTube, races such as the Ocean Race and the Golden Globe. The website for the Ocean Race, you might know it as the Whitbread or the Volvo Ocean race, says “Only the toughest, most experienced sailors are capable of participating in the race. On the longest legs, competitors spend close to a month at sea, running the boat 24 hours a day. The boats are designed for speed — not comfort — so it can be a wet, bumpy ride when the weather isn’t cooperating. Each boat is 65 feet long and built to withstand punishing ocean conditions.

“It’s an experience,” Carlin said. “It can be pretty bleak and if you’re on deck, you’re getting hosed by waves and the salt water gets into your skin and you get calluses and you get rashes and it’s… Yeah, it’s actually not that appealing when you think about it.”

It will make for compulsive viewing when it starts again in 2022. 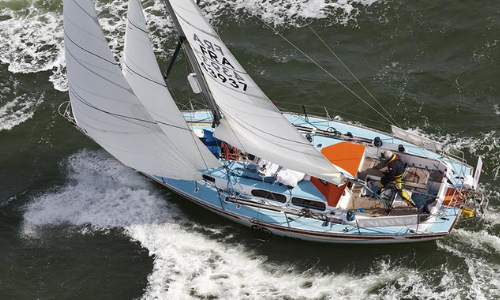 The Golden Globe – one sailor, one boat, no technology and totally alone. What a race, what an adventure, what courage! And once again we have to wait until 2022 for it to start again.

El, who is one of the youngest members of the MWF team, if not the youngest, picked the YouTube channel “Sailing La Vagabonde”, the ongoing adventures of an Aussie couple who have made a life for themselves sailing around the world. You may have heard of them when they took Greta Thunberg from the US to Lisbon for the 2019 United Nations Climate Change Conference in Madrid. Between 2014 and 2018 they have sailed over 105,000 kms including 3 Atlantic crossings and one Pacific Ocean crossing. As El says “I love how their adventure-packed videos allow you to experience the magic of sailing and travel from your own home”. If you have ever dreamt of living life on the ocean wave, you have got to take a look at how they are living their dream, and in an eco-friendly way. 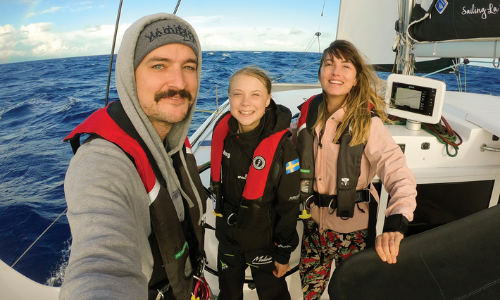 For me, my recommendation is “Maiden”. It was a revelation. How was I completely unaware of this feat of endurance, the first all-female crew to enter, and (spoiler alert) to complete the Whitbread Around the World race in 1989? I was living in the UK at the time, I was around the same age as Tracey Edwards, how did I not appreciate what an extraordinary thing it was that she had done in putting together a female crew and taking on the chauvinistic sailing fraternity? They had been called, in the newspapers, “A tinful of tarts” and were not expected to complete even the first leg of the race. That the film is a documentary is all the more powerful in telling this story.  You see the exhaustion and the pain, the triumphs and the disappointments, whilst the men grudgingly begin to accept that these women can actually sail! Maiden herself has now been re-launched, and although temporarily stopped, she is sailing to raise awareness and funds for the education of girls globally. 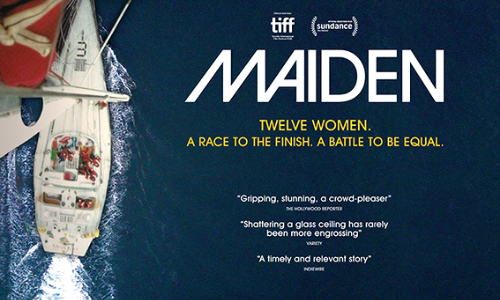 I have been fortunate enough to sail a leg of the Clipper Round the World Yacht race earlier this year, the only non-professional around the world ocean race, sailing from Airlie beach to the Philippines (26 days at sea), having not sailed much before, apart from the mandatory training. Watching Maiden takes me straight back there. I hope to do a trans-Atlantic crossing when the race resumes. I can’t quite believe I am wishing I could be out on the ocean, racing again!

I hope you will find time to seek out our recommended films, books and YouTube channels and that they take you out on the ocean and allow you to sail away from everyday life, if only for a short while, and to be in the moment with the wind in your hair – enjoy!