In March 2020, 26 years after coming into fruition, Sailors with disABILITIES changed their name to the Making Waves Foundation. It was a decision that came with a lot of consideration, a quarter century of changing lives is no simple feat and the name had been cemented in sailing history with world record titles and incredible achievements, but what was the vision for the next 26 years?

One of our incredible volunteers shares her perspective on the transition and the future of Making Waves.

When I was told about the idea of changing our name to the Making Waves Foundation, I wasn’t too keen on it at first. I mean, the new name was clever – Making Waves of positive change in people’s lives and then rippling on into society. But I identified very strongly with the name Sailors with disABILITIES – I’m a person with a disability and I’m also a sailor who has a disability. There’s something very empowering about flying around the race track with everyone else, the big “I Can” and “Sailors with disABILITIES” emblazoned proudly on the hull for everyone to see, doing just as well as everyone else. Yes, doing our jobs a little differently to everyone else, but our boat still performs just as well. That’s one of the things I desperately want in life – to be included, given the chance to have a go, feeling safe to go about an activity in my own special way, and consequently demonstrating to people that I’m still perfectly capable. At the end of the race day, after being successful and competent on the water, back in the yacht club the other sailors we were racing against see us sitting around the table having drinks together. There’s a girl in a wheelchair, there’s a guy with a guide dog, there’s a girl with an insulin pump, there’s a guy who is a bit socially awkward, and there are others who appear to be able-bodied, but sailing under our flag, our fellow competitors understand that not all disabilities or chronic conditions are visible.

Sailing under our flag, I’m proud to be identified as being a sailor who has a disability. When I wear our uniform, sail on our branded boats, or see our name in the entrants list at regattas it feels like I’m silently shouting out, “Yes that’s right, people with disabilities can take on the demanding and risky sport of sailing too. Just because there’s something different about me doesn’t mean that I can only sit at home all day, wrapped up in cotton wool, while you go out and do whatever your heart desires!” 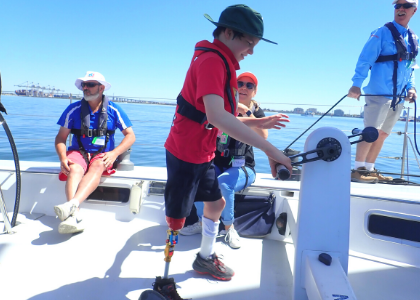 Disabilities are not limiters on our sailing programs

I’ve never had a problem with being labelled as having a disability – it isn’t a negative or yucky word. I only began to feel negativity around my condition when I left rehab and re-entered society. People would take a 3-second look at me, and from that make judgements on what I should and shouldn’t be doing, how I should be treated, what my capabilities are, and that my life must be terrible and unfulfilling. The self-confidence and self-worth I had from before my accident and still carried through rehab was blown to pieces when I began experiencing society’s judgements, limitations, teasing and exclusions. Didn’t it feel good for my actions on the water to be saying, “Yes, I sailed that same race as you did – next time you see someone like me, may you think twice about what that person in the wheelchair is capable of.” Society is the problem – not the word.

But thinking back over the hundreds of young people I’ve met through our programs I began realizing that not everyone has reached a place where they are ready to yell out that they too are Disabled and Proud. Maybe they instead try to hide signs of their disability or don’t want to be involved in something that will point out that they have a disability. I don’t know what goes on in other people’s lives, but from my own experiences of how you can be treated when people know you’re different, I can understand why. So, I began to realize that there would be young people we could be reaching, but we’re being hindered because our name immediately identifies them to their peers as having a disability.

My thoughts continued along this line for some time until it struck me that the same thing would go for all the young people we work with who don’t have a disability, but may have a life challenge, chronic illness, an issue with mental health, or are disengaged and at risk. These young people are definitely part of four of our programs – Winds of Joy, Winds of Change, Wright of Passage, and Racing. But because our name immediately says that we are a group of sailors who have a disability, are we missing out on reaching them? 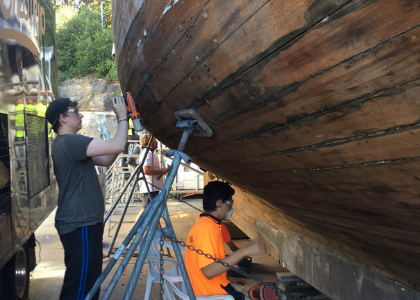 Participants from the Wright of Passage Program which targets at risk and disengaged young people.

Some time ago now I was helping two of my fellow volunteers run an information stand at the Police Legacy Expo. As police officers, family members or other care/support-providing individuals passed by I would tell them about what we as an organization do and the benefits our programs can have. Of course, at an expo of any kind, everyone doesn’t stop at every stand – you stop at the ones that look like they’ll have something that will interest you. During the day I took an opportunity to look up and down the isles of stalls, stopping to talk to people that could fit with our organization – either as providers of participants, or of support and collaboration. I stopped at one stall that was being run by a young policeman and policewoman from the LGBTQ support network for police officers. We began talking about their work and then my work. Impressed that the person sitting in front of them in a wheelchair was a sailor, they asked me about my sailing experiences and what it means to me. I gave them my card and told them that they should come out Twilight Racing on Sydney Harbour with me one Wednesday evening. The policewoman said that that sounded like something she’d want to be involved in. “Actually”, she continued, “I walked past your stand before and thought that it looked like fun, but I saw the name Sailors with disABILITIES, so I didn’t stop to talk to you. I don’t technically have a disability, so I thought I wouldn’t be included.”

That one experience was the thing that flipped my opinions on the suggested name change and rebranding. I put aside how much the name Sailors with disABILITIES meant to me and what I wanted it to mean for others I built up through our programs. I passed off people trying to tell me that ‘disability’ is a negative word that we should move away from as fake news. Inclusion – the one big thing I want so desperately in my life, yet the name of the organization I love so much doesn’t have an inclusive name – it doesn’t include all the groups of people our programs have evolved to cater for. Yes, Sailors with disABILITIES was an excellent choice of name when the organization began. But over the last 26 years of existence, it has grown from a race crew of people with disabilities and sailing experience days for kids with disabilities. With more resources, more volunteers, and big picture thinkers, we’re now also reaching out to kids who are disadvantaged, disengaged, at risk, or have been through hard times and trauma. Our name needs to immediately reflect that we include them.

The rebranding from Sailors with disABILITIES to the Making Waves Foundation is both an exciting and challenging time. We have big aspirations; we have big goals – we want to continue what we’ve always been good at – making waves of positive change.

Working through our social media I know that there have been mixed reactions to the rebranding. Whatever your feelings, I hope that me sharing my personal journey through the name change has given you something to continue thinking about. We value our community of friends and supporters – I cannot continue working towards the dreams I have without you.