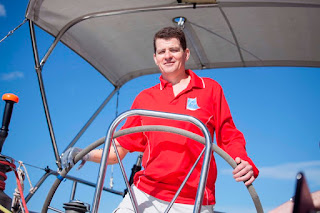 Dislikes: Flat batteries on my prosthestics

Summary of Sailing Experience: Brett was a novice sailor until he lost his leg and arm and then the world of ocean racing was opened up to him. 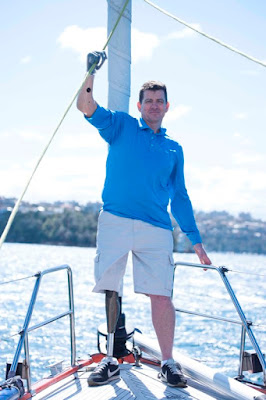 We interviewed Brett about the Sydney to Sydney Challenge and this is what he had to say:

What’s exciting about being part of the Sydney to Sydney Challenge for you?

"This is the biggest offshore event I’ve been in. As nervous as I was when I did the Sydney to Hobart, it’s that extra distance which has been tacked on. It’s exciting to be part of something where we’re attempting to set a record.

It’s a great idea to set goals and that’s what life is all about—setting goals and going out and achieving them, proving that anyone can do it. I’m so grateful to be part of this team and being able to contribute.

WOT EVA is a great yacht. It’s a really fast yacht which I found out going to Hobart—surfing down 4 metre waves. And, yeah, I just think that what MWF does is awesome and I’m just grateful to be a part of it and that David’s invited me along to be a part of this whole journey."

What about being disabled on the ocean?

"You come to terms with your disability. I came to terms with it pretty quickly and I’ve applied that to being on the boat. My skill level when I first came down here in my electric wheelchair was minimal—the bare essentials. I guess over time, as much as I’ve learned how to use my prosthetics, I’ve also learned how to be part of the team on the boat and how things work and how to get the most out of the boat and yourself. You do push yourself. You make sure you’re ready when you wake up for your shift and when you’re called on."

If a young person saw you in this event, and could relate to you and your disability and had a challenge in their life, what would you say to them?

"I guess when you’ve got a challenge, look at it as an opportunity. If somebody gives you an opportunity to do something, don’t be scared. Always say yes. People will work with you to help you achieve.

I got to go to Hobart, which I never thought I would, and that was because I continually said yes to things that were happening. Come to Southport – yes. Things like that. You become braver and more confident in yourself by doing those things.

People who ask you to do things aren’t there to watch you fall over; they’re there to assist you and help you achieve those things. They want you to be a better person so why not take advantage of those opportunities and turn them into great goals?"

Support MWF in the ASX Thomson Reuters Foundation raffle and help raise funds to do more work with people with disability.