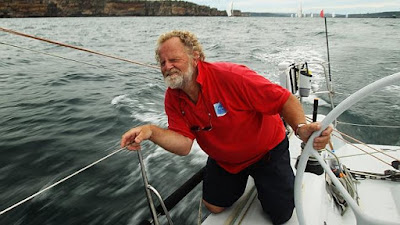 Sailing experience: David started sailing as a child on the waters of Port Hacking where he grew up. He has sailed almost continuously for 60 years, and does so with a passion that is infectious. He also has a strong commitment to teaching, and all who sail with him benefit.

During his youth David discovered he was a sufferer of dyslexia. His experience with dyslexia has given him a very personal insight into living with a disability, especially one that is not obvious to the casual observer. 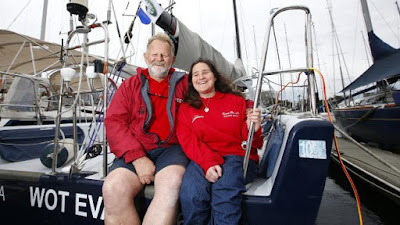 In 1993, David heard of the idea to gather a crew of disabled sailors to sail in the Sydney-Hobart Yacht Race. He believed that with his experience, his dyslexia, and his yacht, he could make a contribution to this dream - and he did.

A self-confessed stubborn, hard-nosed ‘grump’, who does not suffer fools gladly, ‘Pesky’ expects much from people at times, but is a real softie with a heart of gold underneath all that bark.

Some of these traits, which some of his critics are not exactly complimentary about, are the same traits that got MWF going in the first place, and got a boat load of disabled people through many ocean races, including their first Sydney-Hobart race in 1994, and the tragic 1998 race, in which the team finished 9th over the line and won their class. The fact they finished the race at all, when most of the fleet did not, is a major testimony in itself.

Throughout the over 23-year history of MWF, David has been the leader, teacher, boat builder, host, visionary and most of all, caring and encouraging to the many disabled people who have benefited from sailing with MWF. He continues to be dedicated to demonstrating the capabilities of disabled people of all ages in a positive and heart warming way.

Now 68, David selected his crew for this adventure for their expertise and passion. He is married to Deb and has two daughters, Gayle and Katie, and grandchildren Brittany, Hannah and Austin, all of whom he adores.
A

We interviewed David about the Sydney to Sydney Challenge and this is what he had to say:

What’s exciting about being part of MWF’s Sydney to Sydney Challenge?

"Anytime you’re out at sea it’s great. I’ve been doing this for 65 years and I get the same buzz I did today as I did the first time I got a door and jumped on a door with one of my Mum’s sheets and sailed down Yowie Bay. I mean, nothing has changed.

The sea is just my home; it’s the place that rewards me, renews me. It’s an honest environment. It is also a very threatening and dangerous environment so it makes you pay attention to detail. There’s an old expression I love: “for a halfpenny of tar, a ship was lost.” Or words to that effect. So it speaks about detail and that’s my job on the boat. I have to make sure every little sharp edge on the boat has some tape around it."

What would you like to say to a child who looks at this challenge and thinks, ‘I can’t do it.’?

"You can do whatever you like. There’s only one deal in life. You’re given the gift of breathing. You’re given the gift of life. It’s your responsibility to do the best with it you can with whatever tools you have. Some people have lots of tools. Some people don’t have so many. It doesn’t excuse you from doing the best you can with what you’ve got."

"It’s very blunt. I want to continue to improve what we’re doing and to do that, we need some money. We’re supporting 4000 kids a year. We’re in Tasmania, Melbourne, Sydney and Queensland. We need help. A major sponsor or donor. If we don’t get it, who knows? MWF has never been more effective and innovative than it is now, so it’s critical and it would be a great loss if we couldn’t continue."