The Sydney to Sydney Challenge was a world-first adventure in which Sailors with disABILITIES set out to set a world record for the Sydney to Lord Howe Island passage with a crew of 10 in a mono-hull yacht, the TP-52 WOT EVA.

The event aimed to raise awareness of the strength and abilities of people with disability and the work of SWD.

Of his inclusion in the Challenge, Brett Whiteley said, "It’s a great idea to set goals and that’s what life is all about—setting goals and going out and achieving them, proving that anyone can do it. I’m so grateful to be part of this team and being able to contribute."

The crew before departure on October 22nd at the CYCA, Sydney. Months in the planning, the crew of disabled and able-bodied sailors, headed out of Sydney heads under grey skies at 2.30 pm on Thursday 22nd October for the world record attempt. Off, off and away, heading east to Lord Howe Island The record attempt aim was to set the fastest time possible from Sydney Harbour to Lord Howe Island for the world record, and to set a fast time on the return leg to Sydney.

The crew sent updates during the passage attempt to let us know they were safe and to show the reality of life at sea:

"On course for the sea mounts. Doing 12 knots of speed. Reef in the main sail. No. 4 jib is up. All crew are up on deck. Had ham sandwiches for lunch!"

"The latest word from WOT EVA offshore east coast of NSW was that the team are "getting bashed up a bit". It's a rough night at sea, pouring down rain and testing the wet weather gear, but everyone is ok.They have 30-35 knots of wind but this is expected to ease off in 3 hours time, after midnight. They're now at -33.46165 , 153.15088"

"There are a few minor injuries on WOT EVA but everyone is ok. Major props to George Johnstone and Markie Mark who've skippered throughout the night. It's too rough to use the stove so crew are hungry and hanging out for hot coffee."

"There's more water inside the boat than in the ocean," said David Pescud when he called us on the sat phone. The crew decided to sail north of the sea mounts instead of over them. They're past them now and heading east to Lord Howe Island. The wind instruments blew off the top of the mast and they think it's blowing about 20 knots of wind.Location: About 15 hours from rounding Lord Howe Island roughly 8 - 9 am tomorrow morning, in daylight--at least the crew will be able to see it.If you're on Lord Howe Island and want to see this, you can join Macca the official timekeeper at Flagstaff Point tomorrow morning--he'll log the time for the world record passage attempt.

"The crew got bashed about in the passage attempt," said David Pescud, Skipper of WOT EVA. "But they all pulled through and we sailed past a sunny Lord Howe Island on Saturday morning with the WSSRC and a bunch of people in a runabout waving us on as we sailed past."

The crew in the sunshine after rounding Lord Howe Island 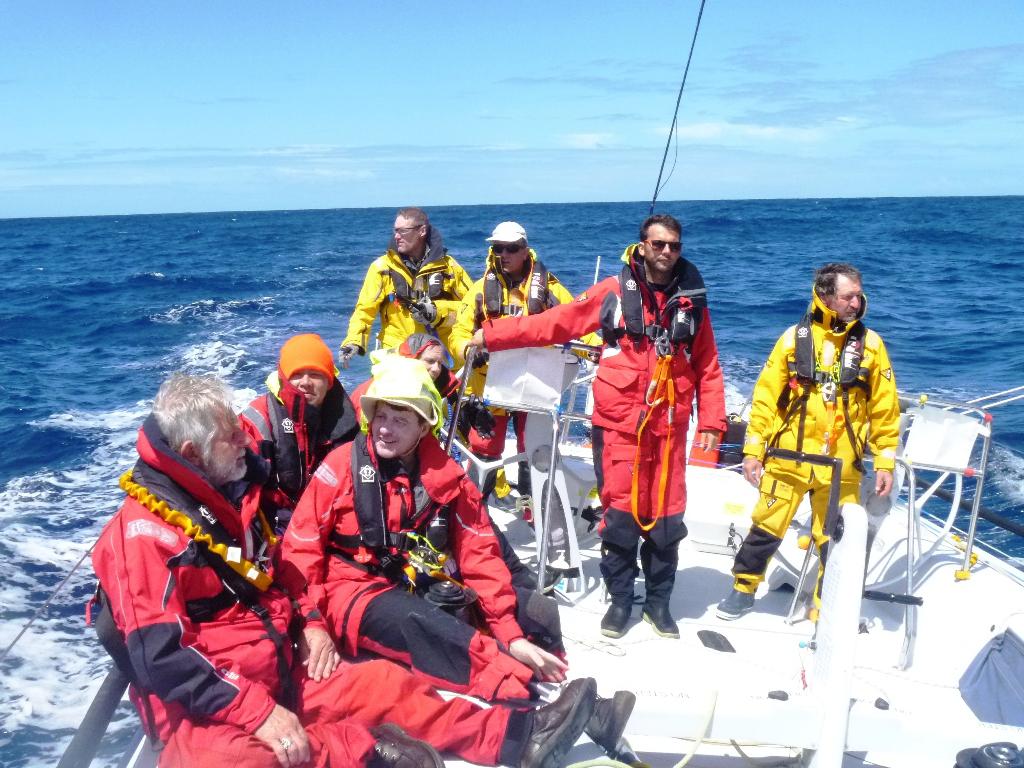 Balls Pyramid in the background. We were here! The crew returned to Sydney Harbour, sailing past the Opera House just after 4 pm on Monday 26th October. SWD are now waiting anxiously for the World Speed Sailing Record Council to ratify the record for a mono-hull yacht sailing the Sydney to Lord Howe Island passage.
A

"This time next year we aim to sail the same course. There's no yacht race finishing on Sydney Harbour. This could be the start of something big,” David said.

Thank you to our supporters for the huge support across social channels during the event.

We were honoured by the words of support SWD received online from many supporters including the Prime Minister, Malcolm Turnbull, who is one of SWD's patrons. We also wish to thank Sandra Sully, Ten News, Graeme Innes, Crewsaver, PWD Australia, Ability Options, The Collective NSW, and many of our very own SWD volunteers and supporters, and many other individuals who discovered SWD and this event, some for the first time. A massive thank you to the CYCA for sharing our event on their site: Sailors with disAbilities' Wot EVA returns to Sydney today after world record attempt

Another huge thank you to Sydney Boating for sharing our story on their site, too:

"Sailors with disABILITIES skipper David Pescud and his crew return through Sydney Heads and plan to reach the Opera House around 5.00pm today after attempting a world record passage from Sydney to Lord Howe Island..."

You can search through our social media for posts and photos using hashtags:

You can also see all images from the event here in our Flickr gallery.