In 2014 Kathy Veel joined the Making Waves Foundation(MWF) as a volunteer Skipper. Having known about the organisation for some time, seeing the Sailors with disABILITIES (as MWF was previously named) boat in the Sydney to Hobart yacht race and watching interviews of founder David Pescud on TV, Kathy joined with the desire to give the experiences sailing had unlocked for her to others. Every Wednesday she takes students and their teachers out as part of the Winds of Change program, as well as leading the team for the Hobart Outreach Campaign and much more. Her passion for sailing and its ability to uplift and engage is a strong feature in Kathy's life.

Kathy’s own adventurous sailing career began aged 17. Her future father-in-law was having a boat built, an S&S 34, state of the art in 1970. Having followed the build they then sailed her. Kathy explains “He raced when he was younger, but in later life sailed for pleasure, and tended to pull the sails down when the wind got to 15 knots! Nevertheless learnt to sail and loved it. Finding myself single again at 27, I decided to buy my own boat, a 24 foot timber yacht with a leaky coachroof and many broken ribs. I learned from a shipwright, fixed her up and sailed her up the coast, to Port Stephens and to Broughton Island. It was a tiny little boat with an open cockpit and an antique petrol engine. But when you are young and don’t know any better, you do crazy things!” Soon Kathy traded up to a 26’ kauri yacht and moved on board, coastal cruising as often as possible, often single-handed, while working full time as a teacher, and completing navigation courses, yachtmaster training and gaining a Yachtmaster Offshore certificate. She also taught sailing part-time! She skippered a couple of deliveries, after which “I found myself as navigator on Dr Who, a Davidson 52 sailing in offshore races. I was the only female crew member, and had to work hard to prove my competence”. 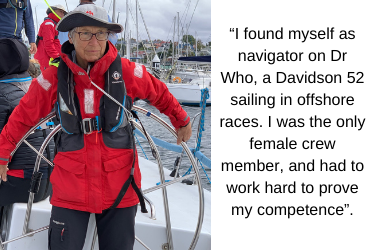 Then things got more adventurous. “In February 1989, a friend of mine, another art teacher and a sailor, called me and said “I want to do an all womens’ Sydney to Hobart. Are you interested?”. I said “yes”. With two others we got busy fundraising, and chasing media to build a profile so we could attract sponsorship. None of us had a boat so we had to find one, charter it, recruit crew and train them. This was the beginning of Women on Water and we found ourselves at the startline on Boxing Day on board a Peterson 44 named Belles Long Ranger (formerly Ragamuffin) and we completed the race!”

They were only the second all-woman crew to complete the Sydney to Hobart race. While Kathy says it wasn’t the toughest race, there were winds of 30 to 35 knots around Flinders Island. They had to convince race officials to allow them to continue when one of their crew members fell overboard, hitting her head. The two nurses on board managed the situation.

On the basis of their previous success, two years later Women on Water got sponsorship from Telecom which allowed them to charter a Farr 40. “She was the perfect boat for us and we were much more competitive”. Women on Water went on to promote womens’ involvement in sailing through subsequent Sydney-Hobart races and interstate and trans-Tasman womens’ regattas.

Meanwhile Kathy sold her boat and moved with new husband and baby son to the Blue Mountains. 18 years passed, family sailing on a Mirror dinghy, before Kathy bought another timber cruising yacht which she kept Tasmania for 10 years, exploring the waters around Hobart.

It was the generosity of other sailors who helped Kathy and the crew in their first Sydney to Hobart by lending boats for training, coaching, technical help and encouraging them that made Kathy want to find a way to give back. And it was a little, tiny ad in the corner of Afloat magazine that focused her mind. It stated that SWD were having an orientation day. Kathy went along to find out what it was all about and introduced herself. “I didn’t hear anything back for months and then I got a call from David who asked me “We are thinking about running a programme in Hobart. Are you interested?” “I had just retired, a bit early from a financial point of view, but I wanted to explore other ways of being in the world and had decided to say “yes” to whatever opportunities came up. So I said “Oh yes, I can do that”. At that stage I hadn’t been on any of the boats or done any of the Winds of Joy programmes, but it wasn’t the first time I’d jumped in the deep end then figured out how to swim. It was a really steep learning curve!”. It turned out to be an amazing, life-changing and rewarding involvement.

One of Kathy’s greatest satisfactions was the success of that first Hobart Winds of Joy programme. The fact that it is an ongoing success and is now established as an annual event in the MWF programme is primarily due to Kathy. She recruited “some pretty amazing people down in Hobart as part of the team, some have done parts of the Northern campaign and sailed in Sydney if they happen to be in Sydney and there is a vacancy. They are very much involved with MWF”.

The Hobart campaign is supported by the Derwent Sailing Squadron who provide a berth for MWF, accommodating Kayle or Wot Eva, after they complete the Sydney to Hobart race until the start of the school year when the Hobart programme runs for 2 weeks. Kathy keeps an eye on the boat and then prepares her for taking out students from schools in Hobart and surrounds every day for a fortnight. During the programme Kathy stays on her boat at the DSS, crew from Sydney stay on Kayle or Wot Eva and the Hobart crew commute. 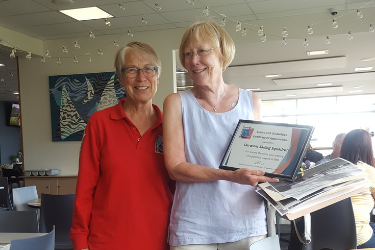 As well her weekly commitment as a skipper during the school terms, and the Hobart campaign, Kathy volunteers as a skipper on the MWF Northern campaign, where Kayle sails up the coast to Queensland. MWF runs Winds of Joy programmes Southport, Mackay, Kepple Bay, Coff’s Harbour and Newcastle. The boat is away from Sydney for six to seven weeks. Four the last 4 years Kathy and MWF volunteer Mike Muir have shared skipper duties, spending 3-4 weeks on the boat. Check out our interview with Mike Muir here - A Conversation with Mike Muir

During her teaching career Kathy had taught in mainstream schools and had had little to do with people with disabilities prior to volunteering with MWF. The way in which she views disabilities and people with disabilities has been profoundly changed. She talks about one of the disabled sailors on the boat. “He has danced with death so many times in his life and he is blind but you’d never know on the boat. He is only one of the many “disabled” volunteers I have met who have inspired me. I have stopped thinking in terms of disabilities. Rather, there is a whole spectrum of abilities that we all have to a greater or lesser extent, and it’s important not to set limits on people. I’ve met some extraordinary people. The first year in Hobart we had some quite profoundly disabled young children and I found it really very upsetting and confronting because you just ask yourself the question “How would I be if that were my child? Would I have it in me to do what their parents are doing?” so it has given me lots of perspective on my own situation and then the gratitude that goes with that as well as more compassion and patience with everyone because of that.”

The idea that nothing is deemed as impossible at Making Waves is central to Kathy’s ongoing commitment as a volunteer. “You never hear “This can’t be done”. It is always “What do we need to do to do this? How are we going to get this happen?”. She believes that is a very powerful part of the MWF belief system and another is treating people with respect, especially the clients. The generosity of the volunteers moves Kathy also. Volunteering with MWF allows Kathy to share her passion for sailing and to create a situation where someone else can experience it. Kathy sums up her passion for MWF thus “Making Waves is quite an extraordinary organisation that has been able to reach out to so many people and also draw together a community of people who are prepared to commit to its vision”. 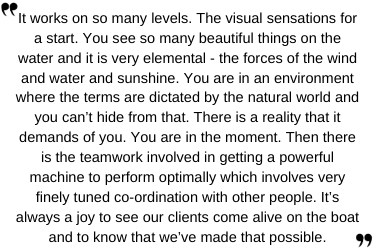 In response to a question as to why sailing is transformative for the students, Kathy describes her own experience of sailing. “It works on so many levels. The visual sensations for a start. You see so many beautiful things on the water and it is very elemental - the forces of the wind and water and sunshine. You are in an environment where the terms are dictated by the natural world and you can’t hide from that. There is a reality that it demands of you. You are in the moment. Then there is the teamwork involved in getting a powerful machine to perform optimally which involves very finely tuned co-ordination with other people. It’s always a joy to see our clients come alive on the boat and to know that we’ve made that possible".

Kathy has made many friends over the years of her involvement with MWF and has really missed them whilst health regulations due to the corona virus have suspended the MWF programmes. “Normally at this time of year, I’d be onboard Kayle with four or five people 24/7 for three weeks and we’d be cooking our evening meals together and working with the students. We are not doing that.”

More recently, Kathy had a lot of fun catching up with some of the volunteers who have been working to put together some Covid-safe programmes to take into schools instead of the schools coming out sailing. Along with familiar faces were three new volunteers which gives her hope for the future of MWF.

Kathy’s motto, or rather advice to herself, is “Just get on with it” – she says she is a bit of dreamer and should just get on with things, rather than procrastinate. She laughs as she says “Maybe my motto should be “One day I’ll stop procrastinating”. She adds “Sailing doesn’t allow you to procrastinate. There are things you have to respond to and it cuts through all of that. When I am on the boat, I feel most real”.

For someone who says she is a dreamer who procrastinates Kathy has achieved so much and given so generously of herself. Her adventurous spirit has allowed her to help others to have a taste of the joy she finds in sailing and maybe they too will find their real selves whilst out on a boat with MWF. 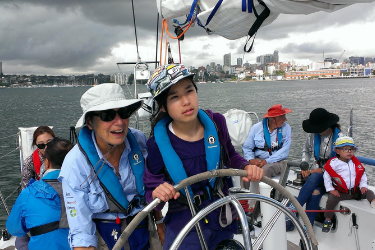