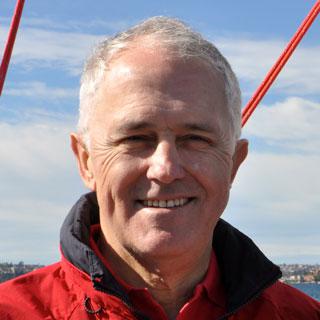 Elected to Federal Parliament as the Member for Wentworth in 2004, Mr Turnbull was appointed Parliamentary Secretary to the then Prime Minister with responsibility for national water policy and, in 2007, he was appointed to Cabinet as the Minister for Environment and Water Resources.

The Hon Malcolm Turnbull graduated from Sydney University with degrees in Arts and Law. He was a Rhodes scholar and completed a further law degree at Oxford. Malcolm worked as a journalist both in Australia and the United Kingdom before he began legal practice in 1980.

He successfully defended the former MI5 agent Peter Wright in his efforts to publish his memoirs, Spycatcher. He established his own investment banking firm in 1987 and, during that time, co-founded a number of Australian companies including OzEmail Ltd, Australia's first large Internet service provider.

He joined Goldman Sachs & Co in 1997 as Chairman of its Australian business, becoming a partner of the global firm in 1998. He is married to Lucy and they have two adult children.

The Hon. Malcolm Turnbull launched our faceboat community and assists with our programs when he can.